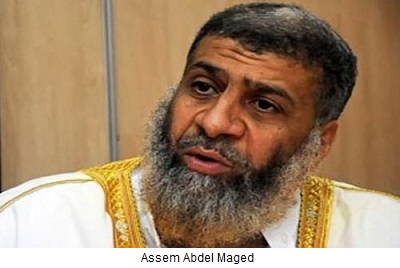 (AINA) -- The youth-led Tamarod (rebel) Initiative has collected more than their targeted 15,000,000 signatures calling for a no-confidence vote against President Mohammed Morsi and forcing early elections in Egypt, causing the ruling Muslim Brotherhood party and its Islamists partners to feel seriously threatened, say political observers. Millions are expected to join a nationwide anti-Morsi and anti-Brotherhood demonstration set for June 30, to coincide with Morsi's first anniversary as president. Protesters in Cairo will go to the Presidential "Unity" Palace in the Heliopolis suburb of Cairo with their demands. "We will stay there until Morsi leaves," said Mahmoud Badr, spokesman for Tamarod. In every other Egyptian province local protests will be held. Expatriate Egyptians will also hold demonstrations in their respective countries.

This week Assem Abdel Maged, a leader of the Egyptian extremist group Gamaa Islamiya, said that those calling for the demonstrations are "extremists Copts" and issued a warning to the Coptic church and Christian citizens who plan to join in the protests on June 30. Speaking on an Islamist satellite channel (video), he said "Do not sacrifice your children, Muslim public opinion will not tolerate toppling the President."

Abdel Maged denounced the Coptic rights group Maspero Youth Union as "extremist Copts" whom he holds responsible for the Maspero massacre on October 9, 2011 which claimed the lives of 27 Copts and injured 329, with no Muslim casualties (AINA 10-10-2011). "They held battons in the shape of crosses and assaulted the Egyptian soldiers and smashed the heads of the army recruits with stones while they were in their armored vehicles." His criticism targeted another rights group, Copts Without Shackles, whom he claims is made up of communists and atheists.

Abdel Maged, who was sentenced to life imprisonment for his role in the terrorist attacks in the late eighties in Minya on police headquarters, killing 117 policemen, is coordinator for the Tagarrod Movement to support Morsi and counter the Tamarod initiative. "Not one single Copt signed our petition," he said.

"Who will be responsible if fanatics slaughter the Copts because of this incitement?" asked renowned Egyptian TV anchor Amr Adeeb, on his nightly program.

It was reported that the Presidential palace applied pressure on Coptic Pope Tawadros II in order to forbid the Coptic Orthodox Christians from joining the demonstrations. However, the Pope told the media the "Copts are free to choose." This was also confirmed after a multi-denominational meeting of Christian leaders this week in Wadi Natrun, which stressed the freedom of Egyptian Copts in determining their position on the events of June 30, and the Egyptian churches do not impose a specific position on the Copts. "The church does not play politics," said Coptic judge Amir Ramzy of the Cairo Criminal Court, adding that Pope Tawadros is different from the late Pope Shenouda III, who had asked the Copts not to join the protests of January 25, 2011 Revolution, which ousted former president Mubarak. "The Copts still joined, so even if Pope Tawadros asks the Copts to boycott the June 30 demonstrations, they will still go out."

Maspero Youth Union announced that they have pressed charges against Abdel Maged on grounds of threatening Egyptian citizens, attempting to threaten social peace and instigating sedition. They will hold him fully responsible in the event that Coptic property or churches are subjected to any attacks before and during the event of June 30 through his instigations.

During the Presidential elections in 2012 which, brought Morsi to power, over 6,000,000 Copts voted, excluding those who were prevented by force by Islamists from leaving their villages to cast their votes, which would not have gone to the Muslim Brotherhood candidate.

Addressing the Copts, Ibrahim Eissa, editor-in-chief of Al Tahrir newspaper and TV presenter, wrote "you are not a minority, you are many and influential, and your participation on June 30 will cause panic to the Muslim Brothers and their partners."