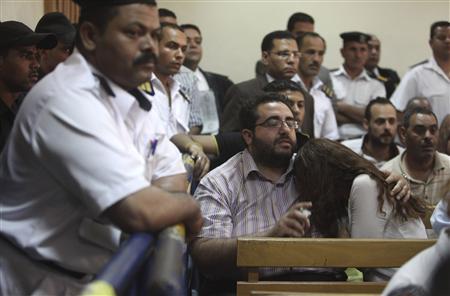 Friends of Egyptian suspects react as they listen to the judge's verdict at a court room during a case against foreign non-governmental organisations (NGOs) in Cairo June 4, 2013.

By Shaimaa Fayed and Maggie Fick

CAIRO (Reuters) - An Egyptian court gave jail terms to 43 Americans, Europeans, Egyptians and other Arabs on Tuesday in a case against democracy promotion groups that plunged U.S.-Egyptian ties into their worst crisis in decades.

Judge Makram Awad gave five-year sentences in absentia to at least 15 U.S. citizens who left Egypt last year. He sentenced an American who stayed behind to two years in prison and gave the same sentence to a German woman.

U.S. Secretary of State John Kerry harshly criticized the decision, calling it "incompatible with the transition to democracy" and a violation of the government's commitment to support civil society as it emerges from years of authoritarian rule by close U.S. ally former President Hosni Mubarak.

The court ordered the closure of the non-governmental organizations (NGOs) involved in the case, including the U.S.-based International Republican Institute (IRI), National Democratic Institute (NDI) and Freedom House.

Both NDI and IRI plan to challenge the verdict.

In Washington, the State Department issued a tough statement in Kerry's name but did not hint at any consequences - such as a cut in U.S. assistance to Egypt - as a result of the verdict.

"The United States is deeply concerned by the guilty verdicts and sentences ... handed down by an Egyptian court today against 43 NGO representatives in what was a politically-motivated trial," he said.

"The decision to close these organizations' offices and seize their assets contradicts the government of Egypt's commitments to support the role of civil society as a fundamental actor in a democracy," he added.

IRI said in an emailed statement that the ruling "was a politically-motivated effort to squash Egypt's growing civil society, orchestrated through the courts, in part by Mubarak-era hold overs."

The NDI said separately: "The Institute will do whatever it can to clear the names of its innocent employees."

The Egyptian investigation focused on charges that the groups were operating without necessary approvals and had received funds from abroad illegally. Eleven Egyptians who faced lesser charges were handed one-year suspended sentences.

The Americans sentenced in absentia include the son of U.S. Transportation Secretary Ray LaHood.

At one point Egypt placed travel bans on the suspects, including U.S. citizens who took refuge in the U.S. embassy. They were allowed to leave the country on bail of $330,000 each, money that ultimately came from the U.S. government.

Egypt was run at the time by a military council that assumed power from deposed President Hosni Mubarak. Although the case is a legacy of that era, analysts say it further darkens prospects for an open society after the Islamist-led administration drew up a new NGO law seen as a threat to democracy.

The American who stayed behind is Robert Becker, a former NDI employee. The German sentenced to two years is an employee of the Berlin-based Konrad Adenauer Foundation.

"We are outraged and very concerned about the court's harsh decisions against the employees of the Konrad Adenauer Foundation in Cairo and the order to close the office," said German Foreign Minister Guido Westerwelle.

"A CHILLING EFFECT" ON CIVIL SOCIETY

The government said the NGOs were operating illegally in Egypt and complained that after the anti-Mubarak revolt, the U.S. government had diverted $150 million from its Egypt aid budget to these NGOs, breaking bilateral agreements.

Civil rights campaigners in Egypt saw it as part of a concerted campaign against NGOs waged by remnants of the Mubarak administration to crush the nascent democracy.

"The verdict is obviously going to have a chilling effect on the climate for civil society in Egypt, but that's already been happening for some time," said Shadi Hamid, director of research at the Brookings Doha Centre, a think-tank based in the Gulf.

The judge handed five-year sentences in absentia to other defendants identified as citizens of Norway, Serbia, Germany and Arab states and one whose nationality was not given.

Despite the furor over the case, the United States released its annual military aid for Egypt in March, 2012, saying U.S. national security required continued military assistance.

The U.S.-based groups were training Egyptians in advocacy, voter education and election monitoring.

But Western and Egyptian critics say the draft falls short.

The EU, a major donor to Cairo, said on June 2 it would unnecessarily constrain the work of NGOs in Egypt, while Washington said the bill imposed significant government controls on the activities and funding of civic groups.