A man suspected of staging a terrorist attack that left a British soldier dead near a military barracks in London, was caught on camera clutching a meat cleaver and knife in hands apparently covered in the blood of his victim, as he justified the violence as part of a jihadist-inspired fight against the west.

The incident happened in broad daylight, 400 metres from the perimeter of the Royal Artillery barracks, in Woolwich, south-east London, sparking a terrorist alert that saw the government crisis committee Cobra convene in emergency session. Hours later, David Cameron described what had occurred as "an absolutely sickening attack".

Witnesses said a man was hacked at by two assailants with weapons including a machete in horrific scenes, carrying strong echoes of attacks abroad, at about 2.20pm. It is understood that the victim was a soldier, although neither his identity nor profession was confirmed on Wednesday night.

The two men remained on the scene, until armed police arrived up to 20 minutes later. They were shot and apprehended by armed officers and taken to two separate hospitals where they were being treated for their injuries under armed guard in the aftermath of the first al-Qaida inspired attack to claim a life on British soil since the 7 July bombings in London in 2005.

As counter-terrorism officials raced to work out if the incident was a random, macabre event or the start of a trend, astonishing footage emerged which explained why the government was so quick to treat it as a terrorist attack.

In mobile phone video footage first broadcast by ITV News, one of the suspects was seen brandishing a cleaver and a knife. With the body of the victim lying yards away, the man said: "We swear by almighty Allah we will never stop fighting you. The only reason we have done this is because Muslims are dying every day. This British soldier is an eye for an eye, a tooth for a tooth."

Speaking in a British accent, the man said: "We must fight them. I apologise that women had to witness this today. But in our land our women have to see the same. You people will never be safe. Remove your government, they don't care about you."

The rhetoric is reminiscent of that used in al-Qaida-influenced propaganda, in particular the reference to "our land" – phraseology used by violent jihadists to describe Muslim territory being despoiled by western soldiers. In the footage, the man then walks away and talks to another suspected attacker, pictures of whom were also circulating.

People spoke of attempts made by some passers by to stop the attackers. One of the assailants reportedly danced near the body, lying in the street, and then approached bus passengers, asking people to take his photograph.

There were unconfirmed reports that the attackers may have had a gun and raised it, possibly even fired it as armed police arrived. Graham Wilders, a witness, said: "I walked back up there and the tall black bloke had changed the gun to the other guy and he had two meat cleavers in his hand.

"And the response police turned up and he's ran towards them with meat cleavers before I could even get out of the car so they shot him. And then the other one lifts the gun up and they shot him as well."

Later a photograph surfaced of a second potential suspect holding a bloody knife.

One witness, identified as James Heneghan, said he and his partner saw two black men attack a young man aged around 20 in a Help for Heroes T-shirt with kitchen knives like he was "a piece of meat". 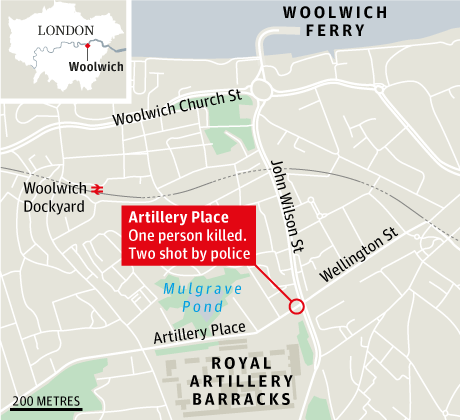 The barracks is home to the Princess of Wales regiment and the King's Troop, which is a ceremonial unit that relocated to Woolwich last year. One source suggested the victim had been returning to the barracks after attending an army recruitment event in central London.

David Cameron, in Paris for talks with the French president, François Hollande, described the killing as "truly shocking" and said he had asked the home secretary, Theresa May, to chair a meeting of Cobra, the government's emergency committee. He said Britain had faced terror attacks before and added: "We will never buckle in the face of it."

May said she had been briefed by the director general of MI5, Andrew Parker, on the "sickening and barbaric" incident. The terrorism threat level remains at substantial, meaning an attack is a strong possibility. The threat level is determined by the Joint Terrorism Analysis Centre, Jtac. The attack, if confirmed to be terrorist, exposes a gap in efforts by police and the domestic security service MI5 to keep track of potential violent extremists.

It was a new style of terrorist attack in Britain, and reminiscent of a past and disrupted plot by violent jihadists in Birmingham in 2007 to kidnap and behead a British Muslim soldier. It is believed the person died after suffering knife injuries, possibly around the head area.

David Dixon, headteacher of nearby Musgrave school, said he heard gunshots and locked the school down: "I saw the body lying in the road. We locked the gates, we locked everything down to make sure the children were safe inside …we kept them safe."

Muslim community leaders and law enforcement sources said they were alert to the danger of a violent backlash following the attack, a fear heightened by Woolwich's past history of racial tensions. The Woolwich and Greenwich MP, Nick Raynsford, said: "Obviously at a time when there are rumours circulating there must be cause for concern." There were reports last night that leading members of the extremist English Defence League were trying to mobilise in the area.

It was Raynsford who first said that a member of the armed forces was most likely to be the victim. He said: "The incident occurred early afternoon. One individual is dead, two others are seriously injured and in hospital. We think a serving soldier was the victim. We don't know the circumstances surrounding the incident. We do know a number of weapons have been seized. They include a gun, various knives and a machete, apparently."

The Muslim Council of Britain said: "This is a truly barbaric act that has no basis in Islam and we condemn this unreservedly. This action will no doubt heighten tensions on the streets of the United Kingdom. We call on all our communities, Muslim and non-Muslim, to come together in solidarity to ensure the forces of hatred do not prevail."

Commander Simon Letchford, from Woolwich police, said: "At approx 1420 we were called to reports of an assault in John Wilson Street, Woolwich where one man was being assaulted by two other men. A number of weapons were reportedly being used in the attack, and this included reports of a firearm.

"Officers, including local Greenwich officers, arrived at the scene and shortly after firearms officers arrived on the scene. On their arrival at the scene they found a man, who was later pronounced dead.

"Two men, who we believe from early reports to have been carrying weapons, were shot by police.

"They were taken to separate London hospitals, they are receiving treatment for their injuries."

The Independent Police Complaints Commission is investigating the shooting by police, which is standard in cases where officers open fire.

The Cobra meeting was attended by the Metropolitan police commissioner, Sir Bernard Hogan-Howe, MI5 officials and senior government officials. Top of the list of issues they needed to address was a trawl of intelligence to see if there was any indication of further attacks, and clues as to whether the suspected attackers acted alone or with help.