Egyptians v Saudi Arabia: it's all got rather messy

Putting Mubarak in the dock upset Gulf's patriarchal order. Saudi Arabia is trying to play hardball but it may not work 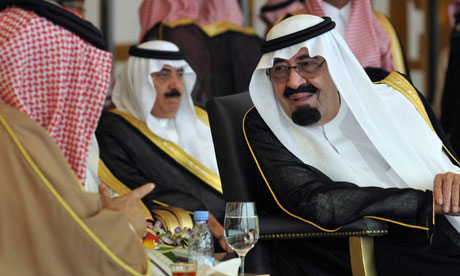 King Abdullah of Saudi Arabia (right) speaks with Bahrain's King Hamad bin Isa al-Khalifa. 'It’s no secret that they have been terrified of the prospect of the Egyptian 'contagion' spreading to their societies.' Photograph: Reuters

While protesters were fighting street battles with the military police in Cairo last week, Egyptian officials were bowing courteously before King Abdullah of Saudi Arabia asking forgiveness for the unruly behaviour of demonstrators outside his embassy in Cairo.

The demonstration outside the Saudi embassy had been triggered by the arrest of an Egyptian lawyer at Jeddah airport for allegedly trying to smuggle illicit substances into the kingdom. The Egyptians suspected foul play, saying the man was framed because he had campaigned on behalf of his compatriots held in Saudi jails without due process.

A war of words between the media in both countries followed, culminating in the mob daubing "profanities" on the wall of the embassy and hurling abuse at the Saudi king – some even trying to pull down the Saudi flag. The Saudis were angry, the Egyptians furious, and the full facts of the incident were lost in the fog of verbal abuse. We may never know what – if anything – this man is really guilty of.

The official Saudi response, however, was amazing. Recalling the ambassador and closing down the embassy looked like pressing the nuclear button for a country known for its extreme caution on foreign policy matters. Not to mention the fact that Egypt is a close neighbour, the most populous nation in the region – and "a sister Arab state", in the defunct language of pan-Arabism.

Now, though, the official supplication before the Saudi monarch has paid off – the ambassador has returned to Cairo. The storm may subside, but only for now. Critics have described the high-powered visitors to the Saudi monarch as grovellers, a delegation of shame that included the Islamist speakers of upper and lower houses of parliament (both members of the Muslim Brotherhood), prominent Salafist clerics and other figures known for their sycophancy.

The whole drama underlines two important things about Egypt and about the Saudis, as well as other Gulf rulers. The arrest of the lawyer has tapped into resentment among Egyptians regarding their treatment by the Saudis – especially under the odious "sponsor" system, according to which migrant labourers are deprived of basic rights. (There are about 2 million Egyptians who live and work in the kingdom.) The reaction on the streets of Cairo and other cities was also a stark illustration of what post-Mubarak Egypt is like: rebellious, chaotic, irreverent and determined to defend its sense of national pride (true or imagined) after decades of ignominious clientelism under Mubarak.

And it's precisely this that worries the Saudis and the Gulf emirs, and may explain in part the unusual Saudi reaction. It's no secret that they have been terrified of the prospect of the Egyptian "contagion" spreading to their societies. They tried until the last minute to prevent the fall of their best buddy in Egypt, Hosni Mubarak. They have also tried and failed to prevent his trial. Putting the old man in the dock has turned the Gulf's patriarchal order upside down.

However, the Saudis and other powerful Gulf players have tried to influence events by other means. Financial arm-twisting is the one they know best. They have withheld aid for the rapidly depleting state coffers in Egypt and dispensed their largesse on their Salafi friends and other Islamist allies in Egyptian society, ensuring a broad and thriving ultraconservative constituency that advocates the Saudi way of life. This will ensure Egypt does not turn into the menace they fear most: an open, secular, multiparty democracy.

Withdrawing the ambassador, closing the embassy and suspending all visas to Egyptians was a warning shot that Saudi Arabia – like other Gulf states – still has another weapon in its armour should the Egyptians continue to "misbehave": closing labour markets to the millions of jobless in Egypt will bring Egyptians back to their pre-revolutionary senses.

But Egypt may not heed the finger-wagging from Arab neighbours or western aid donors, as the recent row over American NGOs clearly illustrates.

Ironically, among the countries that feel the impact of Egypt's revolutionary fervour and disorientation are two at the extreme ends of the spectrum: Israel, which had its gas supplies from Egypt cut as a result of growing popular pressure, and now Saudi Arabia. In both cases, perceived injustice and national pride have played a crucial role, and any future leader in Egypt will ignore that at his peril.

The Egyptian upheaval has laid to rest the cosy division of the region into moderate states (pro-western and pro-peace with Israel) and rogue states (Iran and Syria). In the future, Egypt may well hover between the two, thus rendering the divide useless as an analytical concept or as a guide for foreign policy.