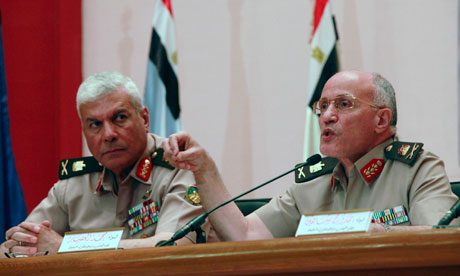 Egypt's ruling generals have launched an aggressive defence of their record in power since the country's revolution last year and denied any involvement in the deaths of up to 20 protesters killed in violent clashes outside the Ministry of Defence on Wednesday.

At a press conference, senior generals offered a message that was occasionally belligerent, often self-serving and at other times defensive, as they promised to cede power to a new president by 30 June – a pledge regarded by many Egyptians with suspicion.

The press conference took place a day before a planned demonstration against the killings and the military – dubbed "The End" – which is backed by the Muslim Brotherhood, Salafist parties and revolutionary groups.

The Muslim Brotherhood has said it holds the military largely responsible for the deaths, which were part of the worst violence seen in Egypt in months.

The killings on Wednesday morning – which the generals said they deeply regretted – targeted mostly Islamist protesters who were angry at the disqualification of their candidate.

Many of those killed were shot in the head in the dawn attack by armed men in Cairo's Abassiya Square, outside the ministry of defence. The assault took place just three weeks before the first round of voting in Egypt's first presidential elections since its revolution last year.

The generals denied they had been responsible for the death of any Egyptians since the revolution but warned that, while soldiers had been ordered to ignore "all insults" directed at them, any protesters who come out on Friday would be responsible for any consequences if they approached military positions.

Although the supreme council of the armed forces insisted it does not have any interest in any candidate in the elections or in the transitional political process, many of its comments appeared politically motivated.

"We say it frankly and clearly, the armed forces and their supreme council are committed to the handover of power on 30 June," said General Momammed al-Assar. "We don't desire power. The supreme council is not a substitute for legitimacy in Egypt."

Warning that the violence on Wednesday had resulted in the wiping of almost £1bn from the Egyptian stock exchange – underlining the sense of turmoil surrounding the elections – the generals added that they still hoped the country's new constitution could be finished before a new president was elected.

They also called on the leaders of parties with religious affiliations including the Muslim Brotherhood and the ultra-conservative Salafist parties to encourage protesters to end their demonstrations, which began with protests by largely Islamist supporters of the ultra-conservative Hazem Abu Ismail, who was banned from standing.

"We are committed to fair elections 100%. We don't have any candidates. All the candidates are respectable Egyptians," said Assar.

"Egypt is in danger … Everyone must realise this danger," said Assar, reflecting the growing sense of political crisis surrounding the elections,. On Thursday three leading candidates – including Mohammed Morsi of the Muslim Brotherhood-backed Freedom and Justice party and Abdel Moneim Abol Foutouh, a former member of the Brotherhood – were told that they may have breached campaign rules.

Assar added he was calling on party leaders to "go to Tahrir Square … stay away from the defence ministry because we don't want to use any violence against our youths."

He expressed the supreme council's commitment to hand over power before 30 June. "If we wanted to forge the elections, we could have forged the parliamentary polls," Assar added.

The crisis triggered by Wednesday's killings has left all sides facing deep challenges over how to respond, not least the Muslim Brotherhood, which had refused to join in the outrage over the killing of protesters by security forces in November and December, for which it was heavily criticised.

Muslim Brotherhood activists confirmed on Thursday they had been reminded by the organisation to avoid any risk of confrontation with the military at the demonstration.

So close to the election, the numbers the Brotherhood can attract to the protest, and the demonstration's outcome, could have a significant impact on the next three weeks' campaigning amid evidence that support for its uncharismatic candidate, Mohammed Morsi, might be waning. The Brotherhood has also seen internal generational divisions between younger supporters unhappy at its policy of non-confrontation with the military.