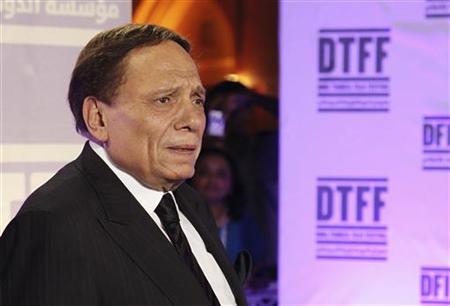 CAIRO (Reuters) - Egypt's Adel Imam, the Arab world's most famous comic actor, had a conviction and three-month prison sentence for insulting Islam in his films and plays overturned on appeal, a state newspaper reported on Thursday.

Imam, 71, has poked fun at officials in his comedies and politicians of all colours during a 40-year career, although he was publicly criticised by many Egyptians for failing to back protests against former President Hosni Mubarak. His more serious films dealt with the rise of Islamic militancy.

Egypt's liberals, leftists and others are worried that Islamists who have emerged as the dominant political force in post-Mubarak Egypt will stifle social and cultural freedoms.

A misdemeanour court overruled the verdict handed down in February against Imam, citing the "absence of a crime", state newspaper Al-Ahram reported on its website. It added that the actor had to pay attorney fees and other legal costs.

His lawyer and court officials could not immediately be reached for comment.

Hundreds of demonstrators gathered in front of the court earlier in the day to support Imam. "We want freedom of creativity" and "No to prosecuting creative artists," chanted the crowd, which included directors, producers and actors.

"This is an unjust case against Imam and a stifling of freedom of expression," actress Jihan Fadel said. "If Imam's appeal is not accepted, this will pave the way for more obstacles in the path of all creative people in Egypt."

But some passers-by shouted "Jail Imam", while two men yelled at the crowd "Imam has always been the enemy of Islam." Some opponents of the actor argued outside the court with his supporters. His backers had banners saying "Art is not heresy."

The case against Imam, whose presence in any move or theatre cast virtually guarantees a box-office hit, was brought by Asran Mansour, a lawyer with ties to Islamist groups.

The sentence against Imam was issued a few weeks after Islamists swept most seats in a parliamentary vote.

Mansour accused the actor of offending Islam and its symbols, including beards and the galabiya, a loose-fitting garment often worn by hardline Islamists, the newspaper said.

The galabiya robe is also traditional dress for Egyptians, whether Muslims or Christians, in rural areas.

Among films and plays targeted by the lawyer were the movie "Morgan Ahmed Morgan" and the play "Al-Zaeem" ("The Leader"), the report said.

Court cases against directors, actors, artists and intellectuals accused of failing to respect religious authority are relatively common in Egypt.

Magy Morgan, one of Imam's supporters, said outside the court: "The revolution was fought for freedom of expression and to see a case like this is a disgrace."