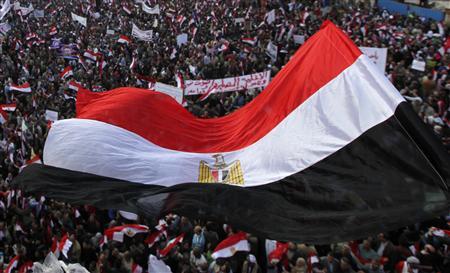 CAIRO (Reuters) - Protesters pressed their demand for an end to army rule in Cairo's Tahrir Square on Saturday and some clashed briefly with police nearby, rejecting the military's choice of prime minister just two days before a parliamentary vote.

Hundreds of demonstrators camped through the night and one group marched to the nearby parliament building early in the morning to protest against the army's appointment of Kamal Ganzouri, a premier under Hosni Mubarak, to form a cabinet.

Police dispersed the crowd with teargas and protesters said at least four people were wounded, witnesses said. The brief flare-up was the first outbreak of violence since a truce two days earlier ended a week of clashes that killed 41 people.

"Down, down with the marshal," a group chanted in the square, near tents set up on grassy patches. They were referring to Field Marshal Mohamed Hussein Tantawi, who heads the ruling army council and was also Mubarak's defence minister.

Tens of thousands gathered on Friday to demand the Supreme Council of the Armed Forces speed up a transition to democracy which they believe requires the generals to leave power now.

The political turmoil and violence are compounding the economic woes of a country where livelihoods have been hit by a year of turmoil after Mubarak was toppled.

The generals have shown no sign of giving way to the demand to quit now. Instead, they have responded by promising that a new president would be elected by mid-2012, sooner than previously announced, and appointing Ganzouri, 78, to head a "national salvation government."

Speaking to the media on Friday, Ganzouri described his task as thankless and "extremely difficult" and listed his priorities as securing the streets and reviving the economy. Egypt's pound has weakened to its lowest level in seven years.

The Tahrir protesters have dismissed Ganzouri, premier from 1996 to 1999, as another face from the past whose appointment reflects the generals' resistance to change.

"Why are they picking Ganzouri now? This shows that the army is unwilling to let go of any power by recycling a former ally. This government won't have any powers, why else pick someone that is loyal to them?" asked protester Mohamed El Meligy, 20.

Tahrir Square and the surrounding streets were relatively calm on Friday after the deployment of extra security forces in areas where youths had clashed with police earlier this week.

The violence has fuelled public anger at the military council and drawn more protesters to Tahrir Square.

In a boost to the military council, several thousand protesters demonstrated in support of the generals' role in another Cairo square on Friday - an echo from the last days of Mubarak's rule when loyalists took to the streets.

The demonstration highlighted the division between revolutionary youths wanting to overhaul the whole system and more cautious Egyptians keen to restore normality.

Ganzouri's appointment has reinforced that divide.

"I favour him. He is a very good man, he did a lot of good things. If he had continued in his role (in 1999) the situation would have been much better," said restaurant worker Osama Amara, 22.

The military council said on Friday each stage of voting would be held over two days instead of one to give everyone the chance to vote. Voting starts on Monday but will not end until early January because of the election's various stages.

In Tahrir, where the main political groups such as the Muslim Brotherhood's Freedom and Justice Party have avoided demonstrating this week, some protesters said the vote should be delayed.

The Brotherhood, Egypt's best organised political force, wants the election to go ahead as scheduled.

"Believe me, I don't know who I am going to vote for," said Hoda Ragab, a 55-year-old woman at Friday's protest in Tahrir.

"In all sincerity, it's because I don't have any programme for any party in these conditions. It would be better for the elections to be delayed a week or two, so we can get over these problems."