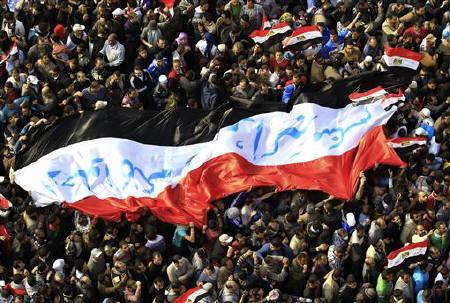 Egyptian protesters march with a huge flag during a rally at Tahrir Square in Cairo November 25, 2011.

By Marwa Awad and Tom Perry

CAIRO (Reuters) - Tens of thousands of Egyptians demanding an end to military rule packed Cairo's Tahrir square on Friday in the biggest turnout of a week of protests and violence that has killed 41 people.

The military rulers named a veteran former prime minister to head a new civilian cabinet, but that did little to appease the demonstrators who poured scorn on a name from the past.

The United States, long a bedrock supporter of Egypt's military, called on the generals to step aside "as soon as possible" and give real power to the new cabinet "immediately".

Protesters accuse the military of clinging to power since it took over when an uprising toppled President Hosni Mubarak on Feb. 11. The past week of street battles between demonstrators and police have looked like a replay of February's unrest.

Kamal Ganzouri, named by the ruling army council to head a national salvation cabinet, said his powers were stronger than those given to previous prime ministers, but gave no details.

"I have asked the Field Marshal to give me a little time so I can form a cabinet that will satisfy the entire people," the veteran economist told a news conference, referring to army chief Field Marshal Mohamed Hussein Tantawi.

He said the new government would not be announced before Monday, the date set for Egypt's first free parliamentary election in decades, which could be overshadowed if the violence of the past week continues.

Ganzouri, 78, served as prime minister under Mubarak from 1996 to 1999. He was appointed after Prime Minister Essam Sharaf's cabinet resigned this week amid the protests.

Protesters responded angrily to the naming of a Mubarak-era veteran. After his appointment was confirmed, crowds in Tahrir chanted in derision: "They brought a thief and appointed another thief", referring to Sharaf and Ganzouri.

Hundreds of protesters shouted "Ganzouri, we don't want you" outside the cabinet offices in central Cairo.

The military rulers have promised a faster transfer of power to a civilian president, now due to be elected in June, and say the parliamentary elections will go ahead as planned.

Until a truce calmed violence on Thursday, streets around Tahrir had become battle zones with stone-throwing protesters fighting police firing tear gas, pellets and rubber bullets, a repeat of the scenes that forced Mubarak from office.

Protesters called for a million-man march on what they dubbed "the Friday of the last chance". A steady stream of men, women and children surged into Tahrir before weekly Muslim prayers, often the day of the biggest demonstrations of this year's "Arab Spring" uprisings across the region.

Some, like Atef Sayed, 45, with his wife and two daughters, were protesting for the very first time.

"We're here to back the idea that the military council hands responsibility to civilians and focuses on military affairs. Nine months have gone by with many things that have happened in a way opposite to what the revolutionaries wanted," he said.

But enthusiasm for the protests was not universal.

About 5,000 people waving Egyptian flags demonstrated in favour of the military rulers in Cairo's Abbassiya district.

"The people want the emptying of the square," shouted the demonstrators, watched by hundreds of people on flyover bridges. A banner read: "Egypt will not be governed from Tahrir square."

Activists who tried to organise a march to Tahrir from a mosque in the capital's Shubra neighbourhood were rebuffed.

"The army council will leave in six months. We have elections in three days. What do these people want?" asked one worshipper angrily. "They are hired to start trouble."

In its strongest statement on Egypt's turmoil so far, the White House stepped up pressure on the military rulers to speed up the handover to civilian control.

"Full transfer of power to a civilian government must take place in a just and inclusive manner that responds to the legitimate aspirations of the Egyptian people, as soon as possible," White House spokesman Jay Carney said in a statement.

"The United States strongly believes that the new Egyptian government must be empowered with real authority immediately."

The army, once hailed for its role in easing Mubarak from power, has come under increasing fire for dragging out a handover to civilian rule, even as Egypt's economy falters.

Many protesters say they do not trust the army to oversee a fair election next week.

The Muslim Brotherhood, which along with some other groups accepted army plans for a faster transition, wants the election to go ahead, drawing scorn from some protesters who say the Brotherhood is focused only on gaining seats in parliament.

The Brotherhood organised a protest last Friday against army efforts to shape a new constitution, but left Tahrir as protests widened. It held a separate rally this Friday at al-Azhar mosque for the "liberation" of Jerusalem from Israeli control.

The Health Ministry said 41 people have died in the week's violence, state television reported. More than 2,000 people were also wounded in the unrest in Cairo and several other cities.

The latest upheaval makes it even harder to dig the economy out of a crisis whose first victims are the millions of poor Egyptians whose frustration spurred the revolt against Mubarak.

Egypt's central bank unexpectedly raised interest rates on Thursday for the first time in more than two years, after depleting its foreign reserves trying to defend a currency weakened by the political chaos.

In fresh blows to confidence, the Egyptian pound weakened to more than six to the dollar for the first time since January 2005, and Standard & Poor's cut Egypt's credit rating.

The economic woes may argue in favour of Ganzouri, whose government virtually balanced the budget, cut inflation, held the exchange rate stable and maintained healthy foreign currency reserves during his time in office from 1996 to 1999.

He introduced some economic liberalisation measures and many Egyptians viewed him as an official who was not tainted by corruption. But his record serving under Mubarak could stir opposition from those demanding a clean break with the past.

Some Facebook activists derided the choice of a Mubarak-era man to steer the country into a new era, listing four ancient pharaohs as useful alternatives if Ganzouri turns the job down.

"Tutankhamun is more suitable because he is from the youth," one said, referring to the boy king of ancient Egypt.