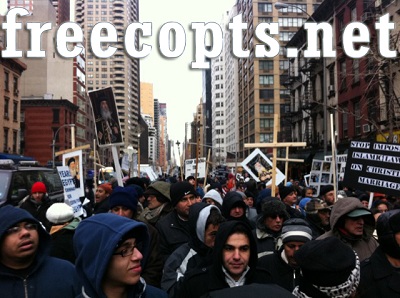 United Nations (AINA) -- Thousands of Egyptian American Copts, led by Coptic bishops and clergymen representing other Christian denominations, protested on December 14 in front of the United Nations in New York against the on-going opersecution of their Coptic brethren in Egypt (video of rally).

The message given by the bishops of the Coptic church was "Enough is Enough" and that Copts will no longer keep quiet as they have reached the limit of their endurance of persecution and must speak out. They condemned the use of live ammunition on Coptic protesters and the Media attack on Pope Shenouda III (AINA 10-28-2010).

Copts everywhere welcomed the presence of Coptic Bishops in the rally, which they considered a sign that the mother church in Egypt is endorsing it and is "telling the whole world that Copts need your support," said one of the protesters.

The rally at the United Nation was preceded by a joint prayers service at the Armenian Orthodox Church of St. Vartan in Manhattan, in which bishops of the Coptic Church in the United States, Canada and Australia, were joined by the Armenian Orthodox Bishop, representatives of Iraqi churches, including Reverend Andrew of the Syriac Catholic Church, which suffered a bloody terrorist attack on Our Lady of Deliverance church in Baghdad on October 31 (Baghdad church massacre).

After the joint church service, Coptic Bishops gave speeches in which they for the first time criticized President Mubarak, "who do not want to give us the right to pray," and the Egyptian government which is not doing enough to "protect its Coptic citizens from Muslim on-going attacks on them," and openly accused State Security of instigating attacks against the Copts. 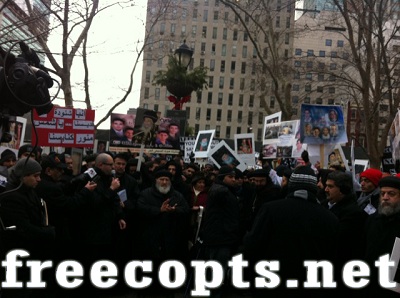 They condemned the Egyptian police for firing at unarmed Coptic citizens. They asked for equal rights in their Egyptian homeland and freedom of religion.

The Bishops called on Copts and Christians worldwide to keep up the pressure on the Egyptian government to abandon its discriminatory policies against the Copts, "as we pressured the racist regime of South Africa until it abandoned racism."

Bishop Sourial of Melbourne, Australia, who came over to New York to join the rally, gave what he called in his own words a "politically incorrect" speech, demanding the full rights of the indigenous Copts and condemning the daily attacks and injustices against them. He called for the release of innocent Coptic detainees in the prisons of the Egyptian government, saying that while some criticize Copts for demonstrating peacefully "we find 'others' using weapons and trying to solve their problems through violence, bombings and suicide attacks." He reminded people of the massacre of the Copts in Nag Hammadi in January 2010, "whose blood is still calling out for justice."

Bishop David, of the Diocese of the North American coast Coptic churches, criticized the use of violence by security forces against Coptic protesters in the church incident at Omraniya on November 24, "which was the latest in a long series of attacks on Copts, for no reason but because they are Christians," adding "and in most of these events justice did not takes its course." He said that there are no measures followed by the Egyptian government to secure the safety of the Copts".

He demanded from the Egyptian Government, as a signatory of the Declaration of Human Rights, equal rights for the Copts. He repeated what Pope Shenouda said last week that "Coptic Blood is not cheap" (AINA 12-11-2010) and confirmed that Pope Shenouda is in retreat at St. Pichoy monastery in Wado-Natroun "because of what happened to his children in the Omraniya incident." 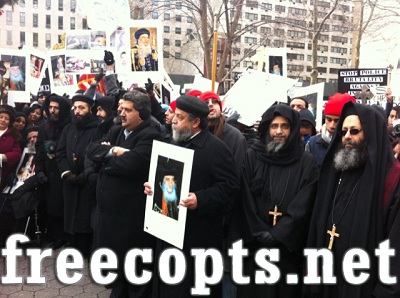 The Omrania incident, dubbed by many Copts as "Omraniya Invasion," took place on November 24, at the St.Mary and St. Michael's Church in Talbiya Omrania, when security forces hurled bricks, fired tear gas as well as live ammunition on protesters, to occupy the church premises. These clashes claimed the lives of four Copts, 79 severely injured, 22 blinded or semi-blinded through tear gas, and 179 detained including woman and children, on false charges (AINA 11-27-2010).

After the church service, the march, led by the clergy who were holding photos of Pope Shenouda, went to the United Nations.

Christians held photos of victims of Muslim violence and of Coptic girls abducted, raped and forced to convert to Islam. They chanted "Why, why. do we have to die?" and "We Need Justice" as well as other slogans asking for killing of Christians in Egypt to be stopped, as well as the burning of churches and Coptic homes.

The rally then went on to the headquarters of the Egyptian mission to the United Nations where Bishop David presented a petition on behalf of the Copts with demands to the Egyptian government so that peace would prevail in Egypt.

The Coptic demands addressed to President Mubarak included full human rights for Copts in Egypt, same rights as Muslims in building their places of worship, justice for the innocent lives lost in Omraniya, and Nag Hammadi, as well as the immediate release of Coptic detainees of Omraniya and Pastor Metaos Wahba, imprisoned for years on false charges of marrying a Muslim girl to a Copt.

The petition called on the Egyptian government to take necessary measures to protect the persecuted Copts in Egypt and bring to trial those who are abusive to Pope Shenouda and who threaten him publicly.

The New York rally is the first in a series of demonstration planned by the Copts in all continents during this week, to protest persecution of Copts and mainly the incident of St. Mary and St. Michael's Church.