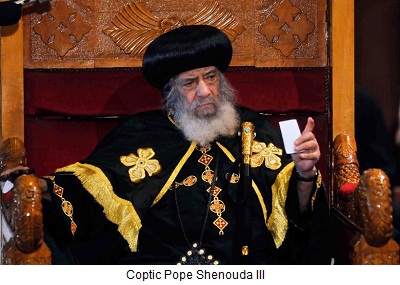 (AINA) -- During his weekly sermon on Wednesday November 8 at St. Mark's Cathedral in Cairo, Coptic Pope Shenouda III said "Coptic Blood is not Cheap," referring to the Coptic young men killed after security forces opened fire on them on November 24. In response to a query from a Copt in the audience as to what was the church doing for the 157 Copts detained and charged in connection with the incident of St. Mary and St. Michel's Church in Talbiya, the Pope said "We are doing our best in this matter."

The 87-year-old pontiff verbally expressed his anger at the authorities in connection with the escalating assaults against the Copts, which many view as a sign of a wide rift between the Pope and the government. He had previously denounced what he described as the "excessive use of force against Coptic protesters" on November 24, adding "Power should be used to serve the people, not for violence. Violence only generates counter-violence."

Pope Shenouda also criticized state security in connection with the incident of el-Nowahed in Abu-Tesht on November 15, in which 22 Coptic homes were torched by Muslims and no charges have been levied against any of the Muslim perpetrators, who have been identified. "Where are the Security Forces and where are the compensations for those poor people," said the Pope, "If they won't then we will" (AINA 11-17-2010)

The latest attack on the Copts took place on November 24, when Security forces clashed with Coptic protesters at several locations, after authorities halted construction of St. Mary and St. Michel's Church, in Talbia, Omrania district, preparing for its demolition. The authorities claimed that the building was licensed as a community center , while the church insists the permit has been changed by the Governor of Giza. It was reported that secretary to the Governor of Giza visited the congregation on November 23rd and congratulated them on the new church (AINA 11-27-2010).

All persons arrested in the clash with state security, including minors, have been charged with premeditated attempted murder of police officers, illegal possession of weapons and explosives without a license, blocking public roads, destruction of public property for terrorism purposes, congregation in violation of the law, and rioting. Such charges carry sentences of 15 years imprisonment.

Lawyer Adel Mikhail said that because the defendants were charged with possession of explosives, cases will be brought before a State Security Court.

Defense Lawyers had submitted an appeal to the Primary Giza Court on December 6, requesting the detainees' release, denying the existence of any justification for their detention. This was turned down and detainment of the detainees was renewed for a further 15 days, pending investigations.

"The accusations made against the detainees are not consistent with the facts. None of the prosecution records proved in any case signs of Molotov cocktails the presence of weapons," said lawyer Adel Mikhail, "These charges are based on hearsay."

On December 9, the Misdemeanor Appeals Court has turned down the release appeal for the Coptic defendants. and upheld the primary Court's decision of December 6.

Adel Mikhail said that the judge listened to the lawyers for over two and half hours, and if it was up to him, he would have released, the defendants. "I understood as a defense lawyer that our appeal was rebuffed due to top level instructions and a pre-agreed plan for the case," he said in an interview with Coptic activist Mariam Ragey.

"Most detainees were either going to school or university or as volunteers or paid workers in the building of the church, when they were arrested by the police." adding "prosecution knows that those defendants did not commit those crimes."

Human rights organizations inside and outside Egypt decried the unjust handling by State Security of the incident, especially the use of live ammunition on protesters. International Christian Concern called for the release of the detained Coptic children.

On November 8, fourteen Egyptian Human rights organizations, headed by the Egyptians Against Religious Discrimination, issued a statement criticizing the interference of state security in the investigations of the detainees, the deliberate medical neglect suffered by the injured defendants, and "to put an end to this security authorities farce, in which the accused are treated like prisoners, depriving them of the rights and guarantees which must not be compromised." The statement decried the crude treatment by security forces and the public persecution of the defense team

A number of rallies are to be staged next week in Europe , Canada, Australia and the US, against the Church incident, decrying the barbaric attack on Copts with live ammunition and demanding the release of those arrested, "who as usual, are taken as "hostages" by the authorities as a means to humiliate and blackmail the Coptic community," said the US-based Coptic Solidarity advocacy .

"2010 is a bloody year for the Copts, starting with the Christmas Eve Massacre on January 6 when six Coptic youth were killed when Islamists opened fire on worshipers as they left the prayer service," said activist Mark Ebeid, "and now comes the Massacre of Omraniya. The only difference is that in the first, three Islamists shot the Copts, but in Omraniya, the mighty State Security did the shooting themselves on the unarmed Copts."