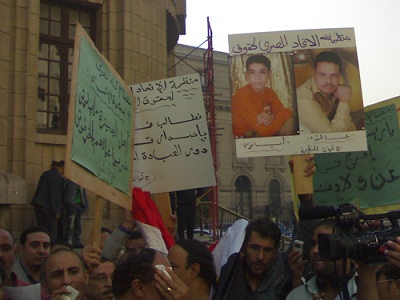 Cairo (AINA)
Dozens of Copts and a number of Muslims protested on December 4th in front of the Supreme Court in Cairo to call attention to the use of deadly force by State Security against Coptic protesters, which occurred on November 24 in Talbiya, Giza. The clashes between Copts and security forces resulted in 4 Coptic deaths as well as 120 injuries (AINA 12-3-2010).

Protesters demanded the release of all detainees, including children and minors, and called for the resignation and prosecution of the Governor of Giza and the Chief of State Security in Giza, "who gave orders to open fire on the unarmed Coptic protesters," said Dr. Naguib Ghobrial, head of the Egyptian Union for Human Rights Organization, who organized the rally.

The protesters held photos of those who died and those who were arrested in the demonstrations. They also held banners and chanted slogans against the Governor, who is viewed by many as being responsible for the incident by assuring the Church congregation, less than 24 hours before sending security forces to storm the church, that he had changed the permit and congratulated them on the new church.

One banner said "it is easier to get a permit for a nightclub than a church in Egypt."

Ghobrial explained to the media that Copts are unable to build a church without the consent of supreme executive and security authorities, especially the State Security service which is the one entrusted with the approval of the building of any church.

Unlike Muslim citizens, who only need a municipal license to build mosques, the Copts require presidential approval for a church, based on the 1856 Ottoman Hamayoni Decree, in addition to ten humiliating conditions laid down by the Ezaby Pasha Decree of 1934, before being considered for a presidential decree. These include the approval of the neighboring Muslim community. 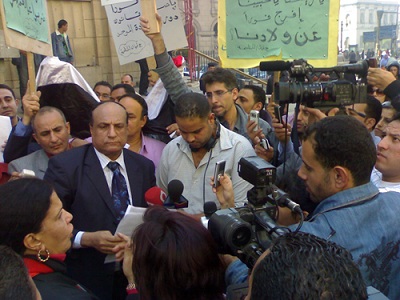 Dr. Ghobrial said that it was not possible that a government treats its citizens according to two standards. "Muslims enjoy building their mosques without any fuss while Christians go through a grueling bureaucratic procedures just to build toilets in a church, or get a Presidential decree to build a church."

The incident of the church in Talbiya gained the sympathy from the Muslim inhabitants of the area, who for the large part refused to join security forces in their attacks against the Copts.

"For the first time we were joined by Muslims in the rally," said Ghobrial. "We wanted to relay a massage to the government to change its treatment of the Copts, who ought to be treated equally to Muslims."

After the demonstration Ghobrial presented a legal memorandum to the Attorney General Abdel Meguid Mahmoud and Interior Minister Habib al-Adli, calling for the release of the prisoners and detainees of the Talbiya incident as soon as possible.

"We told him that it is impossible that the anniversary of the Christmas Eve Massacre of January 6, 2010 comes and our children are detained in the Egyptian prisons," said Ghobrial. "Or maybe this is another Christmas gift from the government" (AINA 1-7-2010).

Dr. Ghobrial said that the Attorney General promised to release the detainees "as soon as possible."