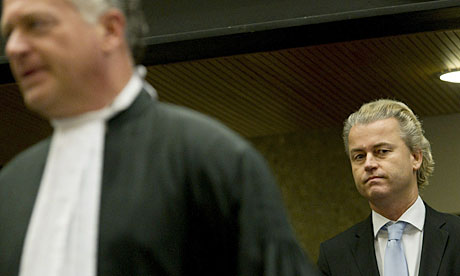 The hate speech trial of the controversial far-right Dutch leader, Geert Wilders, collapsed in disarray at the last minute today when the panel of judges in the case were deemed to be biased. A retrial was ordered.

Wilders, who is enjoying soaring support at home and propping up a new minority anti-immigration government established last week, has been in the dock since earlier this month on five charges of inciting racial and religious hatred for his robust denunciations of Islam as fascist and demanding the Qur'an be banned.

During the trial he has been lionised as a modern-day Galileo as well as branded a "little Hitler". Today was the final scheduled day of the trial, with the verdict from the panel of three judges at Amsterdam district court due next week.

But in the past 48 hours it emerged that one of the appeal court judges who ordered Wilders to stand trial had dinner in May with a potential witness, a Dutch expert on Islam, and that the judge had sought to convince the professor of Arabic studies why Wilders had to be prosecuted.

Last night, Wilders, who has remained silent throughout the trial, tweeted that Dutch justice was like the mafia.

This morning, Bram Moszkowicz, Wilders's lawyer, asked to summon the witness and was refused. He formally protested that the judges were biased against the defendant, a complaint that was upheld by another judges' panel, which ordered a retrial with a new bench.

The highly unusual event means that it is likely to be months before a new trial can be held.

Wilders, whose Freedom party came third in elections in June and who has deftly manoeuvred himself into the role of sleeping partner with the new minority coalition of rightwing liberals and Christian Democrats, has argued that the trial is a farce, a disgrace, and an assault on free speech.

It appeared things were going his way because in testimony last week, the Dutch prosecution service argued there was no case to answer, dismissed all five charges against Wilders, and said he should be acquitted.

The prosecution service initially declined to bring charges against Wilders related to newspaper articles he has written, likening Islam to nazism and because of his incendiary anti-Muslim film Fitna. But prosecutors were ordered by an appeal court in January last year to press charges.

It was one of the appeal judges, Tom Schalken, who had dinner with the Arabist, Hans Jansen, who told a Dutch newspaper today that the judge had tried "to convince me of the correctness of the decision to take Wilders to court".

Moszkowicz had sought to have the trial judges removed on the opening day of hearings after one of them passed comment on Wilders's decision to make use of his right to remain silent during the proceedings. That complaint was dismissed.

The trial has heard a series of Muslims and Dutch citizens of immigrant origin or from mixed marriages argue that Wilders is "dangerous", "divisive", and that he makes them fear for their futures in The Netherlands.

Moszkowicz told the court that Wilders was a straight-talking, campaigning politician seeking to prevent Qur'an-inspired violence.

"Regardless of the danger to his own life, he speaks about the dangers he sees around him that result from immigration," the lawyer told the court. "In his eyes, Islam is a totalitarian ideology."