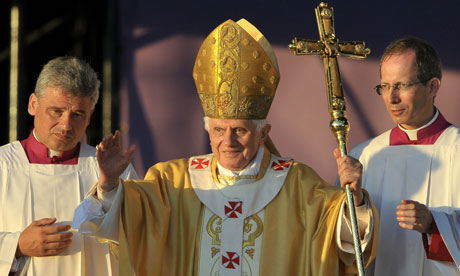 Pope Benedict XVI held mass in Bellahouston Park, Glasgow, at the end of the first day of his visit to Britain. Photograph: Andrew Yates/AFP/Getty Images

Benedict XVI used the first papal state visit to Britain to launch a blistering attack on "atheist extremism" and "aggressive secularism", and to rue the damage that "the exclusion of God, religion and virtue from public life" had done in the last century.

The leader of the Roman Catholic church concluded a speech, made before the Queen and assembled dignitaries at the Palace of Holyroodhouse in Edinburgh, with the argument that the Nazi desire to eradicate God had led to the Holocaust and a plea for 21st-century Britain to respect its Christian foundations.

"Today, the United Kingdom strives to be a modern and multicultural society," he said. "In this challenging enterprise, may it always maintain its respect for those traditional values and cultural expressions that more aggressive forms of secularism no longer value or even tolerate.

"Let it not obscure the Christian foundation that underpins its freedoms; and may that patrimony, which has always served the nation well, constantly inform the example your government and people set before the two billion members of the Commonwealth and the great family of English-speaking nations throughout the world."

The pontiff's speech set the wide-ranging tone for his four-day visit: despite attacking atheism, he paid tribute to the UK's historic achievements and offered "a hand of friendship" to all its people.

After touring the streets of the Scottish capital, which were lined with 125,000 people, and having lunch with Cardinal Keith O'Brien, the leader of the Roman Catholic church in Scotland, the pope travelled to Glasgow where, beneath a cloudless blue sky, he celebrated mass in front of a congregation of around 60,000 in Bellahouston Park.

The pope's comments on secularism and atheism came in marked contrast to the conciliatory and contrite words he offered victims of Catholic sexual abuse.

In a 15-minute long briefing to journalists aboard the papal plane this morning, Benedict described paedophilia as an "illness" whose sufferers had lost their free will.

Using his strongest language to date on his church's record on clerical sex abuse, he deplored its failure to act swiftly and decisively in the past.

"It is difficult to understand how this perversion of the priestly mission was possible," he said, adding that the church was "at a moment of penitence, humility and renewed sincerity".

He said the first priority was to help the victims to recover from the trauma they had undergone "and rediscover too their faith in the message of Christ".

On Friday he will be in London to meet religious leaders, among them the Archbishop of Canterbury, Rowan Williams, before travelling by popemobile to parliament to address an 1,800-strong audience in Westminster Hall including Margaret Thatcher, John Major, Tony Blair and Gordon Brown .

Benedict's opening address followed the publication of an interview in which a senior Vatican adviser described Britain as a "secular, pluralistic" land that had fallen prey to "a new, aggressive atheism".

Cardinal Walter Kasper – the Vatican's leading expert on relations with the Church of England – was immediately dropped from the papal visit following the remarks on the eve of the visit, which included his observation that arriving at Heathrow airport was sometimes like landing "in a third world country".

The Vatican, which said the decision not to bring Kasper had been taken "for health reasons", was swift to issue a statement on Wednesday, explaining that the cardinal "had no negative intention" and that he "recognised the great values of British culture".

Benedict was more explicit in his condemnation of militant atheism, noting that Britain had fought the atheistic evil embodied by Adolf Hitler.

"Even in our own lifetime, we can recall how Britain and her leaders stood against a Nazi tyranny that wished to eradicate God from society and denied our common humanity to many, especially the Jews, who were thought unfit to live," he said.

His pronouncements brought immediate condemnation from humanists and secularists, and some other religious groups. Terry Sanderson, the president of the National Secular Society, said the pope had hardly waited to get off the plane before attacking secularism.