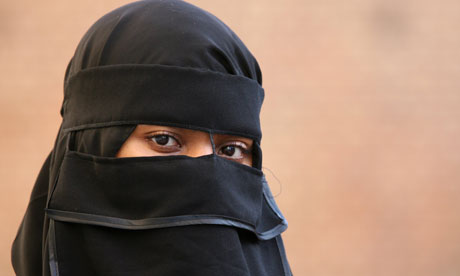 Niqabs such as this will not be seen in any Syrian university once the country's new measures come into force. Photograph: Jonathan Hordle/Rex Features

Syria has banned the face-covering Islamic veil from the country's universities to prevent what it sees as a threat to its secular identity, as similar moves in Europe spark cries of discrimination against Muslims.

The education ministry issued the ban on Sunday, according to a government official. The ban, which affects public and private universities, is only against the niqab – a full Islamic veil that reveals just a woman's eyes – not headscarves, which are far more commonly worn by Syrian women.

The billowing black robe known as a niqab is not widespread in Syria, although it has become more common recently – a move that has not gone unnoticed in a country governed by a secular, authoritarian regime.

"We have given directives to all universities to ban niqab-wearing women from registering," the government official said today.

The niqab "contradicts university ethics," he added, saying the government was seeking to protect its secular identity.

He also confirmed that hundreds of primary school teachers who were wearing the niqab at government-run schools were transferred last month to administrative jobs.

Syria is the latest country to weigh in on the veil, perhaps the most visible hallmark of conservative Islam. The wearing of veils has spread in other secular-leaning Arab countries such as Jordan and Lebanon, with Jordan's government trying to discourage it by playing up reports of robbers who wear veils as masks.

Turkey also bans Muslim headscarves in universities, with many critics saying attempts to allow them in schools amount to an attack on modern Turkey's secular laws.

European countries including France, Spain, Belgium and the Netherlands are considering bans on the grounds that the veils are degrading to women.

France's lower house of parliament overwhelmingly approved a ban on wearing burqa-style Islamic veils on 13 July in an effort to define and protect French values, a move that angered many in the country's large Muslim community.

Opponents say such bans violate freedom of religion and will stigmatise all Muslims.

Duaa, a 19-year-old university student in Damascus, said she hopes to continue wearing her niqab to classes when the next term begins in Autumn despite the ban.

Otherwise, she said, she will not be able to study.

"The niqab is a religious obligation," said Duaa, who asked that her surname not be used because she was not comfortable speaking publicly on the issue. "I cannot go without it."