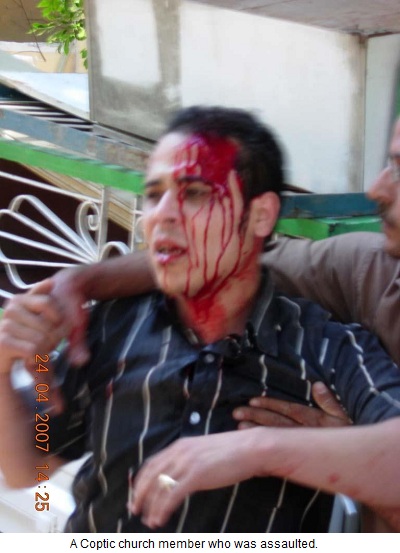 Seven Coptic Christians, including two priests, were sentenced to prison for allegedly being involved in a brawl in connection with a dispute over the purchase of a property by the Coptic Orthodox Bishopric of Delga and Deir Mawas, 270 KM from Cairo. The Misdemeanor Court in Mallawi upheld a verdict passed by the First Instance Court in April, 2007.

The Rev. Maximos Talat and Rev. Bolah Nassif - priest of St. George's Church were sentence to one week in prison and fined 200 Egyptian Pounds, "based on claims made by the 'aggressors' and without any legal basis," according to the their lawyer, Amgad Lamei.

In 2007 an adjacent property was legally acquired by the Bishopric from the Selim family. The dispute ensued after another neighbor, the Shaker family, said they have "right of first refusal" as they are cousins of the Selims, and subsequently occupied the property. The Bishopric obtained an eviction order from the Attorney General.

Attorney Amgad Lamei, who is also sentenced to prison, told Freecopts that during the execution of the eviction order on 4/15/2007, the Shaker family assaulted the party accompanying the two priests, in the presence of the police. "When I saw the brawl, I left the place with the priests and went to the police station to file a report about the incident," said Mr. Lamei. "We went at 14:00 to report the matter to the police, and found out at 17:00 that we had been accused." He expressed his surprise and disappointment at the verdict. He plans to take case to the Court of Cassation, but that will not stop the prison sentence.

There has been an escalation in the imprisonment of clergy. In October 2008 an Egyptian court sentenced Coptic priest Father Mettaos Wahba to five years hard labor. He was falsely accused of aiding a young Muslim woman in getting an ID card that had falsely indicated her religion as Christian, thus enabling her to marry a Christian man and flee Egypt.